Clipper Cove at Treasure Island is widely regarded as one of the most well-protected and scenic small boat harbors on the West Coast of the United States. It is the largest and most valuable protected open-water cove in San Francisco, many times the size of McCovey Cove and far better protected.

The Cove is also home to the only community sailing center in San Francisco, the Treasure Island Sailing Center which hosts several thousand small boat sailors each year, including a STEM program that brings 1,500 San Francisco public school fourth graders onto the Bay every year. For most of these students, this event is their first time on the San Francisco Bay; for many it is their very first time on water.

As one of the safest and most protected areas in the Bay, the Cove hosts national racing championships, such as the V15 nationals, the annual PCISA high school Golden Bear regatta, the Cal Sailing Team, and much more.

However, commercial real estate speculators, led by local political powerhouse Darius Anderson, are proposing to build a private luxury mega-marina in Clipper Cove, devoted exclusively to large yachts (running 40-80 feet).  They propose to demolish the existing private small boat marina entirely.  Under their vision the footprint of the marina in Clipper Cove would grow by 357%, expanding from covering just 7% of the Cove and to covering 32% of the Cove, crippling a Bay Area treasure.  While the Bay Area needs more marina facilities, this particular plan is not appropriate.

This plan is opposed by the Sierra Club, San Francisco Bay Keeper, the US Sailing Association, the San Francisco Unified School District Science Department, and many more. 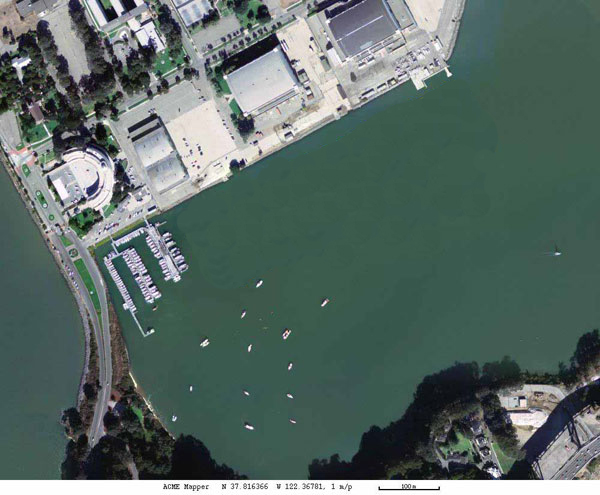 This is an aerial shot of the Cove as it is now, with the current marina tucked into the northeast corner.  The small docks of the Treasure Island Sailing Center docks are at the far right side.  The Cove is also one of the most popular destination for cruising, and so-called "anchor-out" boats can been anchored in the sheltered waters of the Cove. 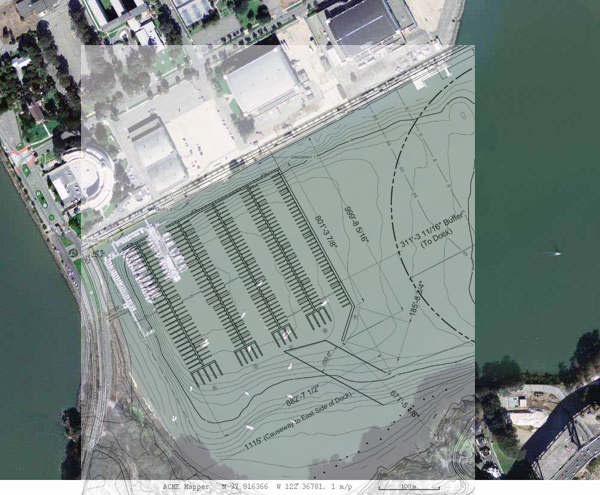 Under the developers vision, the marina is moved out of the corner of the cove and expanded several times over, taking one-third of the Cove.

Here one can see the developer's blueprint overlain on top of the existing conditions at the Cove.

The developers' proposal is based on an outdated environmental impact report completed in 2005 which in turn was based on a public planning process concluded in 1996.  The use of Clipper Cove has changed and grown dramatically since that time. For instance the Treasure Island Sailing center was established in 1999, creating a sixteen year history of teaching kids to sail on Clipper Cove, but none of these uses could have been properly considered in 1996.

The Chair of the Sailing Center recently summed up the impact on the Center this way:

"As result of taking up a third of the Cove, all of our beginner youth sailing programs will be affected, including Set Sail Learn our STEM program for San Francisco public schools which will lose one-third of the area it currently sails in. Additionally, access to the beach, an important destination of our young sailors will be blocked for many new sailors who will not be able to sail through the narrow space between the wave attenuator and YBI. Finally, our High School, College and Adult Sailors, the latter which have been sailing in the Cove since we began in 1999, will no longer be able to hold regattas in the Cove because of the lack of space."

We would never give one-third of Golden Gate Park to a private luxury resort, and we shouldn't give up Clipper Cove.

If you live in San Francisco you can use this smart form, provided by the Sierra Club, to send a personal (and unbranded) message directly to your supervisor, by clicking here.